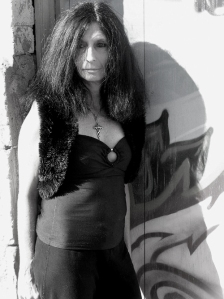 Druscilla Morgan is a Sydney born writer and artist who writes in the horror, fantasy and science fiction genres. Druscilla describes herself as something of a creative shape shifter but the one constant in her work is that it carries a message. It may be a message of beauty and wonder or it may be an exploration into the darker side of human nature and life experience. She believes art and writing should speak for itself whilst allowing the viewer or reader to complete the conversation in a way that is real and relevant to them.

Druscilla has been influenced by many different writers, including Stephen King, Poppy Z Brite, Anne Rice and Brad Land. Whilst her art reflects many influences, from traditional landscape to digital and graffiti art.  Druscilla’s debut novel, Blood of Nyx, co-authored with Roy C Booth, was published in 2016 by Indie Authors Press. Her short stories and poetry have been published in anthologies by Indie Authors Press and Harren Press, as well as Arcanium Axiom magazine and Absent Cause magazine and her artwork has been featured on the covers of books by other writers, including Daniel I Russell, Roy C Booth and Brian Woods. She is currently working on Rise of Nyx, the sequel to Blood of Nyx, along with a stand-alone horror novel.